REVIEW: Everything, Everywhere All At Once [2022] — Movie Reviews — PinoyExchange
Home› PEx International Entertainment› Movie Reviews
Speak your mind, but mind what you post. Let's not spread disinformation and/or misinformation.

REVIEW: Everything, Everywhere All At Once [2022]

PEx_Movies Administrator PEx Moderator
June 29 in Movie Reviews #1
Everything Everywhere All At Once just has this charm that can alternately tug at people's hearts, trigger some brain activity, and draw loud laughs. 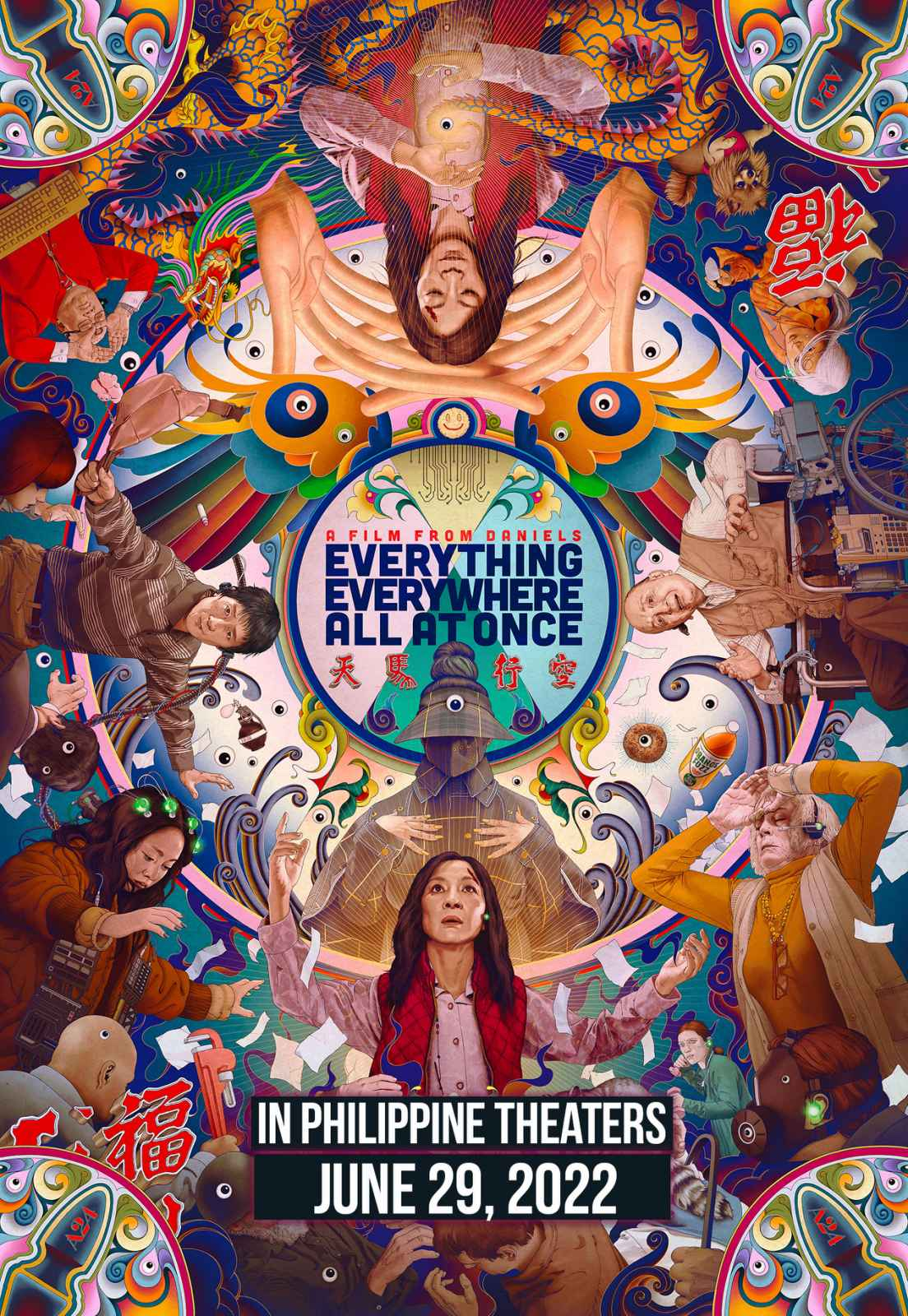 PEx Reviewer: @benchboy
Excited with the idea of a multiverse but tired of all those superhero flicks? Or maybe you wish to see more progressive themes in pop culture but you nevertheless find yourself relating to scenarios in local dramas? Still think Asians deserve wider representation in Hollywood, too? Everything Everywhere All At Once, a part-science fiction, part-family drama/comedy movie headlined by Michelle Yeoh, might be 2022's must watch for you.

It's likely that you've already come across raves on social media about this film as it's been screened overseas and is reportedly available for streaming on certain sites – I'd say the plaudits are well-deserved and that a production of this level merits a trip to the cinema.

Imagine a material written by someone perhaps from ABS-CBN Films with a flair for family dramas collaborating with a wildly imaginative Marvel creative producer and then produced by a studio in Taiwan or China – such a weird mix yes, but with the plot, dialogues, and casting, Everything Everywhere All At Once just has this charm that can alternately tug at people's hearts, trigger some brain activity, and draw loud laughs.

Yeoh was versatility personified in her 'performances', first as this business owner grappling with an incoming tax audit, a mother dealing with a lesbian daughter, a wife about to be divorced by her husband in the current universe; then an actress, a kung-fu warrior, a chef, a traditional Chinese singer, a pizza parlor vendor, and a maid in the other universes. How she, along with the characters in her current universe, jumped all together to other 'worlds', faced antagonists, and eventually resolved dilemmas, is where the movie revolves around.

Amidst all the 'verse jumping', it's the messages delivered through some of the film's lines that easily grab attention and spark reflection, about appreciating one's value, choosing kindness, and fighting for survival. Indeed, one can say the story of this A24 Films production is about the 'what is', the 'what ifs', and the 'what could have beens' and how they can all be interrelated in everyone's lives.

But certainly Dan Kwan and Daniel Schienert, who both wrote and directed this material, likewise made sure that there's some silliness and fun added onto the mix to balance the crazy premise and the seemingly serious mother-daughter, husband-wife moments out. Watch out for the funny ways one is supposed to execute 'verse jumping' – it's a guaranteed LOL sequence!

There's no doubt meticulous effort was also put into the various sets and costumes used for the alternate universes in the movie. Editing was impeccable, too, so overall the visuals were no less topnotch.

To sum up, Everything Everywhere All At Once is highly relatable, enjoyable, and thought-provoking in so many levels. Choose to be fair and watch it in a cinema (with safety protocols of course).
Rating: 9/10
Check out the official discussion here.
Tagged:
5 · Share on Twitter