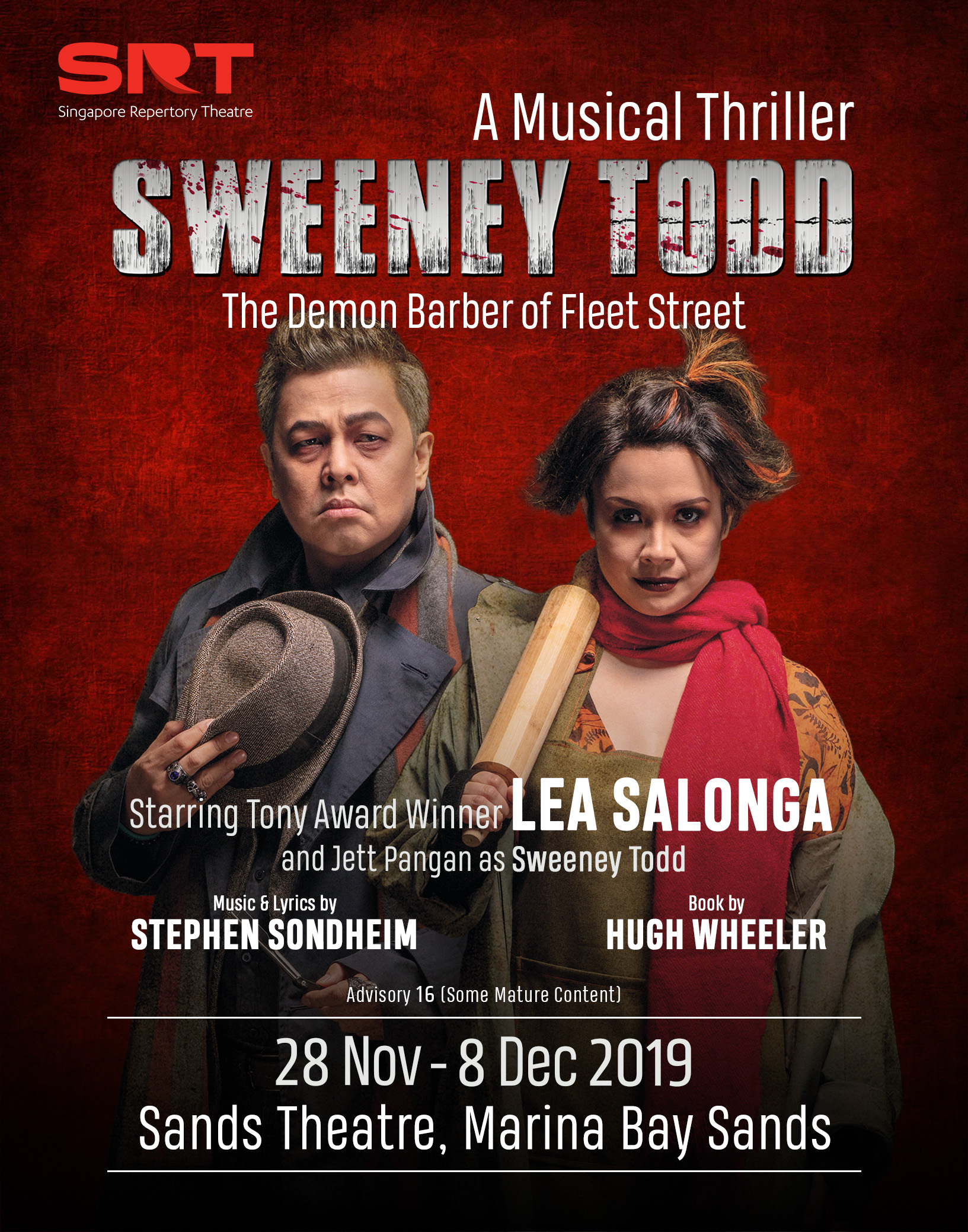 After a successful run in the Philippines, the Atlantis Theatrical Entertainment Group’s staging of Stephen Sondheim’s musical thriller Sweeney Todd: The Demon Barber of Fleet Street is making its way to the Lion City at the Sands Theater, Marina Bay Sands.

Tony and Olivier Award-winning actress Lea Salonga (Miss Saigon) returns to Singapore to star in this tasty, thrilling, theatrical treat. The Broadway star transforms as she sinks her teeth into the meaty role of Mrs. Lovett with OPM legend and veteran stage actor, Jett Pangan, playing the title role of the barber, Sweeney Todd.

Filipino fans that have missed catching the spectacular musical in the Philippines need not look far to witness the story of the Demon Barber of Fleet Street come to life as the production continues to celebrate its 40th anniversary with a series of shows in Singapore this November.

Sweeney Todd has become a bloody, worldwide success since being awarded eight Tony Awards, (including Best Musical), for its Broadway premiere, as well as the Oliver Award for Best New Musical. The Broadway revival went on to win two more Tony Awards taking its total up to 10 Tony Awards. Sweeney Todd was written and composed by the legendary Stephen Sondheim - winner of eight Grammy Awards, eight Tony Awards, an Academy Award, a Pulitzer Prize and a Laurence Olivier Award.

This is the infamous tale of an unjustly accused barber who returns from exile seeking vengeance against the lecherous Judge Turpin who framed him. The road to revenge leads Sweeney Todd to Mrs Lovett, a resourceful owner of a failing pie shop. Mrs Lovett's luck sharply shifts when Todd's thirst for blood inspires the integration of an ingredient into her meat pies that has the people lining up.

“If you are a Sondheim fan, or a Lea Salonga fan, you will love this production! It is the best performance I have seen Lea give in 25 years. She is sensational”, says Gaurav Kripalani, Artistic Director of Singapore Repertory Theatre.

Being staged for the very first time in Singapore, Kripalani adds, “Sweeney Todd is one of the cleverest musicals ever written. Sondheim’s music is pure genius. I was amazed to find out it had never been staged in Singapore. SRT is delighted to be working with our friends at Atlantis to bring this production to Singapore.”