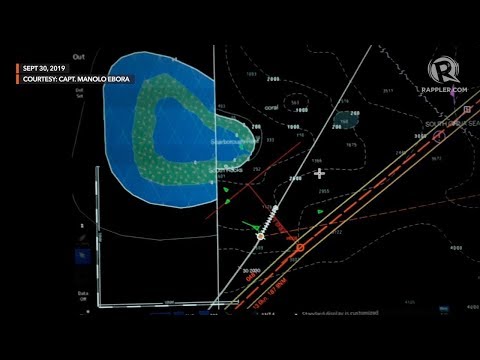 A Chinese vessel that introduced itself as a “naval warship” harassed a Filipino-crewed commercial ship near Scarborough Shoal in the West Philippine Sea on September 30, the ship’s captain Manolo Ebora told Rappler on Wednesday, October 30. JC Gotinga reports
In an exclusive video released by Rappler which was also shared in the Juan Luna Blog page as a ”Watch Party” showing the incident from September 30, 2019 where a Greek owned oil-tanker ”Green Aura” bound for China from Thailand commandeered by a Filipino whose name is  Capt. Manolo Ebora were harassed by Chinese warships within Philippine waters and arrogantly demanded that they change their course

Why should I alter my course? Is this Chinese territory?

Capt. Manolo Ebora repeatedly inquired from the Chinese Coast Guard as to why they have been trying to regulate his passage if he knows full well that he is in Philippine waters and of course prior he already confirmed from the Philippine Naval Station that he is indeed entering Philippine territorial waters. So of course – he knows that under International Law, these commercial shipping lanes legitimately belong to the Philippines under its Exclusive Economic Zone.

Why did he know this? Because the standard Electronic Chart Display and Information System (ECDIS) shows that this ‘Scarborough Shoal’ is administrated by the Philippine government and not China’s new name Huangyan Dao.  He even told the Chinese radio operator that this could not have been controlled by China since this was in fact, even closer to the Philippines than in China’s southernmost province.

But his question of ”Is this Chinese territory” were met with an awkward silence and then just several seconds later, another operator started yapping about what seemed to be a standard spiel stating that ”Scarborough Shoal is under the jurisdiction of the Chinese government” but not directly answering his question of whether this is under Chinese territory. So it sounds Orwellian double-speak to me. Perhaps, China’s own way of vague way of imposing territorial control over these seas within Philippine EEZ without actually directly admitting it.

He even confessed that he couldn’t even sleep after the incident since he was worried that they may be reported to the Chinese authorities and they may well be detained or taken prisoner by the despotic Chinese Communist Party in mainland China which is where they are headed. Fortunately, that didn’t happen and that after staying in China for a couple of days – he was back in the Philippines again and along with it the opportunity to speak up and show the video recording about the incident.

He also mentioned that though they were afraid, but they were happy with what they did and in fact — proud to be a Filipino. Who wouldn’t? If ever I’d have the opportunity to yell at Chinese military thugs through a radio call. I’d be a bit more rough and blunt about this. But anyway – what he did was right, although not necessary for his job but did hell of a better job than our current government.