PH has most number of unsolved journalist killings – report

PH has most number of unsolved journalist killings – report

https://cpj.org/reports/2019/10/getting-away-with-murder-killed-justice.php
The 2019 Global Impunity Index lists 41 unsolved media killings in the Philippines over the last 10 years

WASHINGTON DC, USA – More than 200 killings of journalists are unsolved in 13 countries, which a media watchdog cited for enabling "impunity" for the crimes.

The Committee to Protect Journalists (CPJ) said the countries on its list were home to the majority of journalist killings over the past 10 years.

Somalia was the worst country for the 5th year in a row in a ranking based on deaths as a percentage of each country's population – 25 unsolved killings in a country of 15 million people.

Syria was second and Iraq 3rd on the list.

The country with the largest number of unsolved killings was the Philippines with 41, followed by Mexico with 30, the New York-based group said.

The countries "represent a mix of conflict-ridden regions and more stable countries where criminal groups, politicians, government officials, and other powerful actors resort to violence to silence critical and investigative reporting," the CPJ said.

The 13 countries accounted for 222 of the 318 deaths in the last 10 years, CPJ said, with many of the cases linked to war and civil unrest.

"In the past decade, armed militant groups such as Al-Shabaab, Boko Haram and the Islamic State group have most often targeted journalists with complete impunity," the CPJ report said.

"However, criminal groups have become a major threat, killing large numbers of journalists and routinely escaping justice. Mexico, to date this year's deadliest country for journalists, has seen its impunity rating worsen nearly every year since 2008, as criminal cartels waged a campaign of terror against the media," the watchdog said. 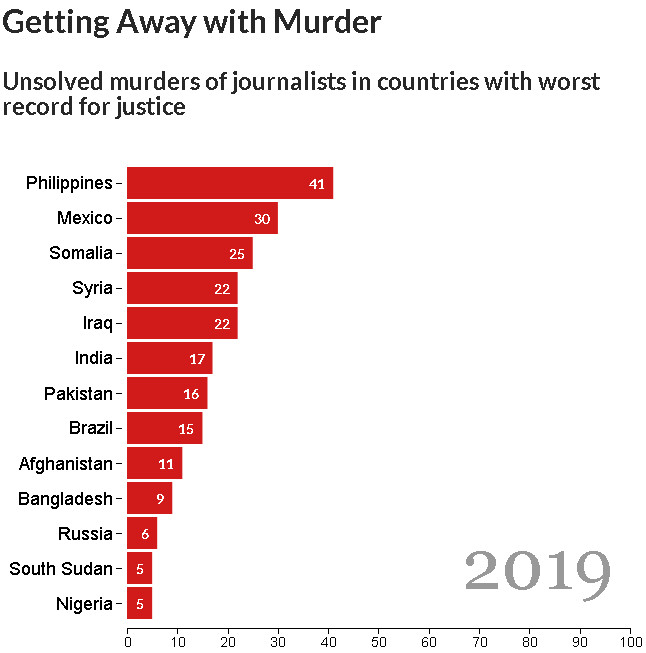 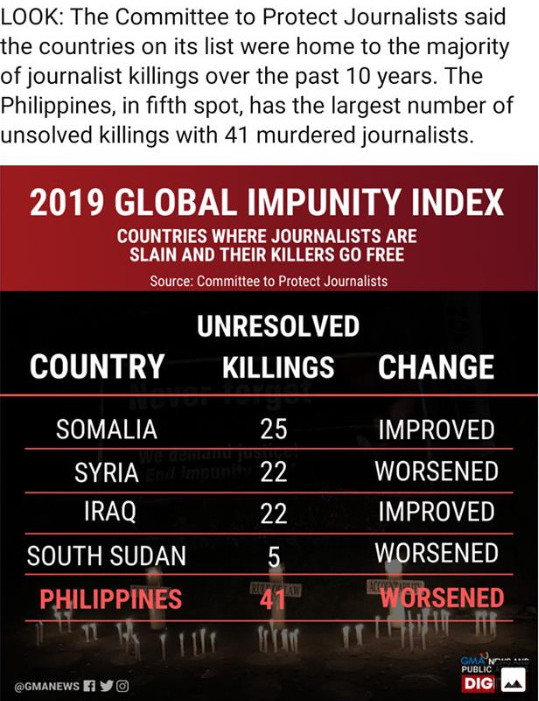