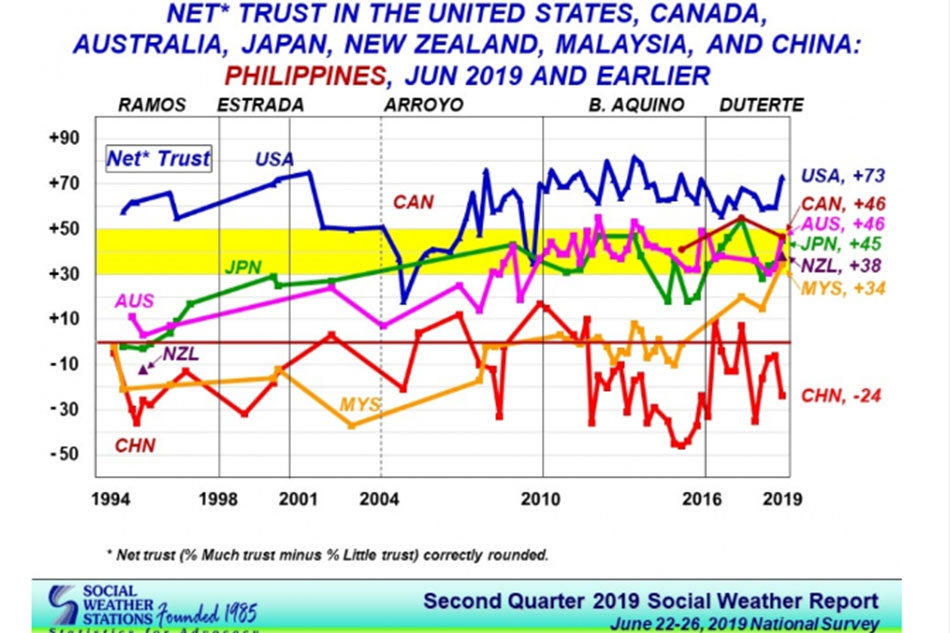 MANILA (UPDATE) - Filipinos are growing distrustful of China, according to a Social Weather Stations poll conducted after an incident in disputed waters that stoked fresh tensions between Manila and Beijing.

The June 22 to 26 survey of 1,200 adults showed that 51 percent of Filipinos had little trust in China, 21 percent were undecided while 27 percent had much trust. This resulted in net trust of -24, worse than the -6 recorded in March, SWS said.

The same survey found that 81 percent had much trust in the US, the Philippines' treaty ally, 11 percent were undecided while 8 percent had little trust, for a net trust rating of 73, up from 60 last March, the pollster said.

China's net trust rating is considered "poor" while that of the US is "excellent," according to the SWS poll, which had a 3-percent error margin.

The survey was done after a Chinese boat rammed a Filipino fishing vessel near Reed Bank in the South China Sea. Twenty-two Filipino fishermen were marooned at sea until a Vietnamese ship rescued them.

The same poll showed that 43 percent of Filipinos disagree with the statement that "Most of what the Chinese government wants to happen in the Philippines is good for the Filipinos." Twenty-seven percent agreed while 30 percent were undecided.

Asked about the statement: "Most of what the American government wants to happen in the Philippines is good for the Filipinos," 55 percent agreed, 28 percent were undecided while 17 percent disagreed.

Among those with “little trust” in China, 21 percent agree and 55 percent disagree that “the Chinese government has good intentions for the Filipino people.”

On the other hand, among those with “much trust” in the US, 59 percent agree and 14 percent disagree that “the American government has good intentions for the Filipino people.”

The June survey had sampling error margins of ±3 percent for national percentages, and ±6 percent each for Metro Manila, Balance of Luzon, Visayas, and Mindanao.