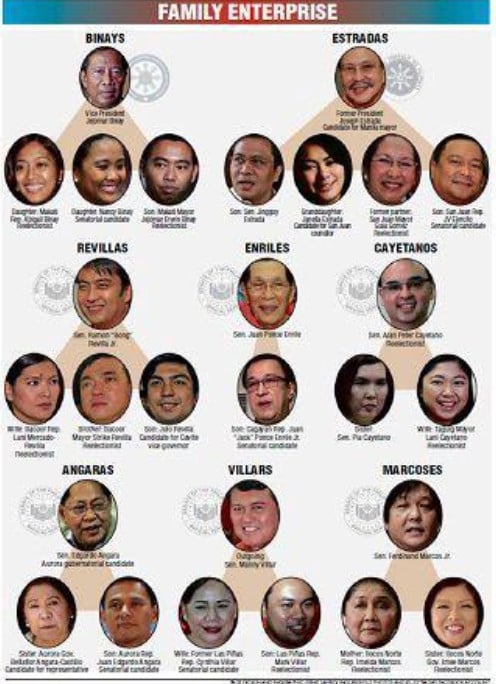 What is a political dynasty? A common meaning is the repeated election and reelection of close relatives with the same surname to offices in the local and national governments. The relatives appear to enjoy a monopoly of political power to the disadvantage of rival leaders. In this sense we can cite many provinces and cities with political dynasties.

Political dynasty members are seen to use their superior wealth, following and access to public resources to favor themselves. They attract their followers and keep them loyal with patronage.

For example, in one province, La Union, the Ortega clan has survived for over a century, or since the beginning of elections under American colonial rule. So there is some reference to an Ortega “political dynasty.”

However, apparently, many people in La Union do not trace the exceptional political supremacy of the Ortega clan to the negative factors we have mentioned. In this sense we can speak of a benevolent and respected Ortega “political dynasty.”

In general, however, political dynasties rise and fall. A political dynasty can be challenged and defeated, then rise again; or fade away when the people are dissatisfied and turn to other leaders.

For a long time, the Osmeñas and the Cuencos dominated politics in Cebu. Now, the Garcias, Duranos and other families are dominant. In other places politics is keenly competitive and unpredictable, and there is a turnover of ruling families.

The issue of political dynasties has heated up in relation to the 2013 candidates for the Senate who come from one and the same family or clan and thus bear the same surname as another senator, or President Aquino himself.

Under the banner of the United Nationalist Alliance, led by Vice President Jejomar Binay, the senatorial candidates include his eldest daughter, Nancy; Rep. Juan Ponce Enrile Jr. who would be joining his father, the Senate President; Rep. J.V. Ejercito who would join his brother, Sen. Jinggoy Estrada.

Prohibited but not defined
Certainly, the framers of our 1987 Constitution recognized the importance of maintaining a level playing field in political competition as expressed in the following provision: “The State shall guarantee equal access to opportunities for public service and prohibit political dynasties as may be defined by law.” (Art. II. Sec. 26)

If the framers had been more serious and discerning, they could have prohibited political dynasties effectively by a forthright constitutional prohibition such as this: “No outgoing elected official shall be succeeded to the same office by any person related to him/her to the third degree of consanguinity or affinity.”

This would prohibit the spouse, brother or sister, or in-laws, children, or first cousins of the outgoing elected official to succeed him/her in the same office.

Lack of implementing legislation would not prevent the enforcement of the specific constitutional prohibition. Indeed, the prohibition would make it mandatory for Congress to pass the implementing law. Or the courts would make the decision in a litigation and direct its implementation. The Comelec would be obligated to enforce the court’s decision.

Biraogo asserts that the Comelec is vested with implied powers to make a definition of political dynasties and the “ministerial duty” to prohibit them. He argues that political dynasties are prohibited by the Constitution because they are inherently bad; it does not matter whether they are reform-oriented, or known for public service like Bam Aquino and the Vice President.

The rapid expansion of our electorate, consisting of more and more poor people, insecure and dependent voters, and increasing political competition have increased the cost of campaigning and incumbency for the political leaders acting as patrons of their constituents.

The cost of elections is rising in all democracies, except that in the industrialized democracies where many middle class citizens contribute to the campaign of their party candidates. Moreover, the state supports the political parties through subsidies.

In contrast, our middle class is not as broad and deep and effective as a countervailing force to the political establishment, although middle class members are becoming more assertive and our media are vigilant.

Again, many of our voters are poor dependents of their political patrons. These conditions put great pressure on our politicians to use their power and influence to raise funds for their political survival often through rent-seeking or private use of power, pork barrel politics and influence peddling.

Political dynasties are thus the cause and consequence of our ineffective and unaccountable patron-client democracy, and personalized parties plagued by misuse of power, corruption and wastage of state resources, and of our rapid population growth and continuing underdevelopment.

We cannot begin to change our political system that breeds these ills without basic structural and institutional reforms, as we critics and Charter change advocates keep saying and writing about.

We need to organize nationwide and democratic political parties based on a defined ideology, and program of governance and reform, with regular dues paying members who continually engage the voters in discussing local and national issues and problems affecting them, and who choose their own leaders and candidates for public office.

Without these various reforms, we cannot develop our economy to make it more productive, competitive, equitable and inclusive in its growth and benefits. We cannot control the excessive growth of our population and upgrade our environment.

We do need a transforming President to unite our legislators,  local government leaders, civil society and media to begin to change the political system, and gradually our political dynasties. This is the true challenge to leaders who say they are committed to change. This is the real direction of “daang matuwid (straight path).”

To be sustainable, fighting corruption and developing the country cannot depend on our President’s charisma alone, however well-meaning and popular and trusted he is. These require dynamic, functional institutions and a critical mass of transforming leaders gradually replacing our political dynasties.

We need inclusive economic growth, population control and a sustainable environment. In a word, we need good democratic governance that will enable us in the long run to “build a just and humane society.”