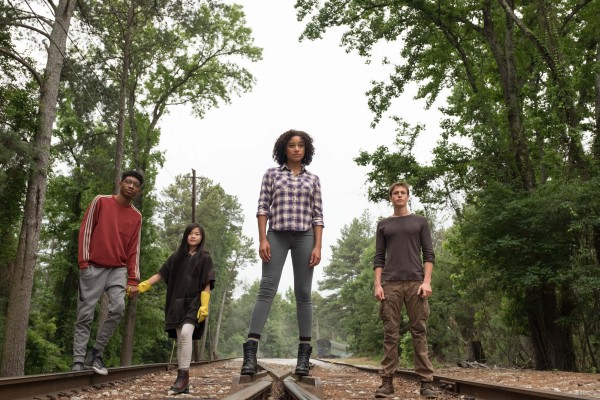 From the producers of “Stranger Things” comes the latest YA book-to-movie “The Darkest Minds” based on the book by author Alexandra Bracken and directed by Jennifer Yuh Nelson (Kung Fu Panda 1&3).

“The Darkest Minds” breaks out when teens mysteriously develop powerful new abilities, they are declared a threat by the government and detained. Sixteen-year-old Ruby (Amandla Stenberg), one of the most powerful young people anyone has encountered, escapes her camp and joins a group of runaway teens seeking safe haven. Soon this newfound family realizes that, in a world in which the adults in power have betrayed them, running is not enough and they must wage a resistance, using their collective power to take back control of their future.

“What blew me away about the story was the amazing, emotional core.  It was what made the book so resonant and memorable.  The characters are not soft-peddled, but show strength far beyond their years. This is a story about friendship and love in the face of a terrible threat… that even if the world falls apart around you, the strange adopted family of your closest friends can see you through. The actors felt that on set, and it was wonderful seeing their bond grow so tight.  This is a story of finding that light in the darkness, and the real reasons we have to fight,” says director Nelson.

Likewise, producer Shawn Levy shares, “The Darkest Minds sits alongside our movie Arrival and TV show Stranger Things in being a sci-fi drama that’s strongly rooted in character.  My colleagues at 21 Laps and I fell in love with Alexandra’s novel several years ago, and its theme— of young people with powers coming to embrace their collective power — is more resonant now than ever before.  The fact that Jen Nelson’s film communicated this rich theme within an action-packed thrill ride that’s as poignant as it is fun – well, that’s exactly the kind of movie I love to see and help make.”