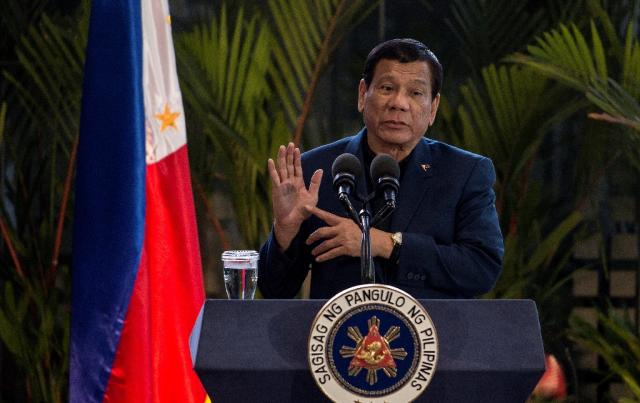 Manila (AFP) - Philippine President Rodrigo Duterte joked Friday that soldiers could ***** up to three women, as he reassured them of his full support under his newly imposed regional martial law.

Duterte, who often peppers his language with man-on-the-street curses, made the comments in jest during a speech at a military base to lift the spirits of troops tasked with quelling what he says is a fast-growing threat of Islamist terrorism.

Duterte imposed martial law on Tuesday across the southern region of Mindanao in response to militants going on a deadly rampage through a city in the south and flying the black flags of the Islamic State group.

Duterte said the militants were planning to establish a caliphate for IS across all of Mindanao, home to 20 million people, and that martial law was the only way to crush the rebellion.

On the election campaign Duterte said he had two mistresses but jokingly reassured taxpayers that he would not cost them much if he was president because he took them to cheap, short-time hotels for sex.

Duterte also attracted controversy when he said he wanted to ***** an Australian missionary who had been caught up in a 1989 prison riot in the Philippines and murdered by the inmates.

"There was this Australian lay minister. When they took them out, I saw her face and I thought, 'Son of a *****. What a pity. They raped her, they all lined up. I was mad she was raped but she was so beautiful. I thought, the mayor should have been first'," Duterte said in April last year.

The Australian and American ambassadors to Manila voiced their disapproval at the comments, but Duterte reacted furiously and insisted he had been taken out of context.

On the campaign trail Duterte also jokingly told voters to open funeral parlour businesses because as president he would fill them with corpses from a war on drugs.

Duterte did launch his drug war, and it has claimed thousands of lives.