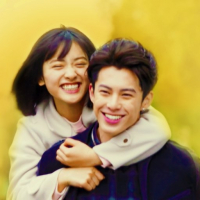 ABS-CBNs newest drama series On the Wings of Love is set to bring romantic and feel-good vibes on Primetime Bida as 2015s most romantic teleserye shares a story about dreams, love, and family.

It is topbilled by one of the countrys most in demand love teams, James Reid and Nadine Lustre.

In their first ever drama series, Nadine portrays the character of Leah, a young woman with a lot of dreams who wants to go to America to help her family.

James, on the other hand, plays the role of Clark, a young man living in America who wants to give his siblings in the Philippines a good life after their mother died.

As she begins to live her American dream, Leah faces a big problem as she finds out that her visa is about to expire. To remain living in the US, Leah makes an agreement to marry Clark, who is an American citizen, in exchange for money that he greatly needs.

How will Clark and Leahs arrangement to pretend as a couple who love each other change their entire lives? What will they do when they find themselves falling in love with each other? Will it fulfill or hinder their dreams?

Modified from source: On the Wings of Love official website (Retrieved 8/8/15) Tita Jack is discreet, resourceful, thoughtful, considerate, and nurturing. She is Clark's aunt and Jigs's mother. She works as a dentist assistant, among other things. She is a lesbian.Mang Sol is protective, cautious, secretive, proud, helpful, and devoted. He is Leah's father. A jeepney driver struggling to make ends meet for his family. He lacks education but is full of love and wisdom.Jigs is handsome, macho, emotional, impulsive, impatient, insecure, and loyal. He is Jack's son, Clark's cousin, and Leah's ex-boyfriend. He works as a junior manager in a fast food restaurant.Tiffany is tall, beautiful, affectionate, resourceful, feisty, and cynical when it comes to love. She is Leah's older sister. She is a single mom and sells beauty products door to door.Lola Pachang is tolerant, maternal, and thoughtful. She is Clark's grandmother and Jack's mother. She looks after Clark's siblings, Jigs, and the rest of the family. She attends to the family's small furniture business.Tolayts is hilarious, comical, unwavering, a dreamer, and a hopeless romantic. He is Tiffany's ardent suitor. He works as a part-time tricycle driver and a full-time bodyguard, driver, nanny, and helper of Tiffany and her son Gabby.