Salutatorian Speech in a school in QC interrupted by school admins 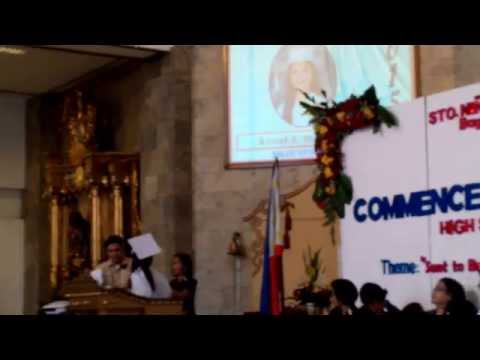 The video is about a salutatorian named Krisel who was stopped by the school's administrators in delivering her speech because of the content.

In every part of Krisel speech that she will be talking about cheating, the school teachers were interrupting her from speaking and asking her to take her seat, but instead of stopping her speech she bravely continued it.

In an interview with ABS-CBN news, Krisel admitted that the speech she delivered in the gradutation rites was not the salutatorian speech that the school approved.

Krisel knew from the start that the speech she wanted to deliver which is particularly about cheating wouldn't be approved by the school admin that's why she made a good one for the school to approve and recite a different speech on the graduation rites.

Krisel Mallari's siter Katherine told the ABS-CBN news that they had been asking the school for Krisel's computation of grades not for competition but for transparency but the admins of the schoold were just shrugging of their requests.

"Limang araw pabalik-balik 'yung dad ko para kunin ang computation," Katherine said, stressing that they are not asking for the computation of grades for the sake of school competition, but for transparency

Because of the speech she delivered in their graduation rites, the school admins didn't gave the award of "Best Religion" to her.

"I am Krisel Mallari, a Filipino citizen who would rather choose to fail with honor, than win by cheating," Krisel would have said had she not been stopped during the graduation rites.