With Marvel Studios announcing that Captain Marvel will be getting her own movie in 2018, we reached out to Kelly Sue Deconnick, the woman who has been writing the comic book since Carol Danvers was re-branded as Captain Marvel in 2012. Believe it or not, she had no idea the announcement was coming.

"I was gobsmacked," she said. "I did not see that coming, and I would have bet high dollar against it. I could not be more thrilled to be wrong."

Deconnick was quick to point out that she is a freelancer working for Marvel Comics on a work-for-hire basis, so she's not privy to the same kind of information that someone like comic writer Brian Michael Bendis -- who is on the creative committee for the movies -- or Joe Quesada -- the Chief Creative Officer of Marvel -- would have.

"There's nothing adversarial about it," she clarified. "It's just a billion-dollar industry where they have to keep everything very close to their chest."

When asked what Captain Marvel brings to the Marvel Cinematic Universe that it doesn't already have, Deconnick was clear and concise: a female protagonist.

"The only thing I know [about the movie] is what [Kevin] Feige said at the announcement, which is, she's an Earth-based Carol who has cosmic-based powers. So the tone of the film is very much up in the air. It'll depend, I'm sure, on the screenplay, what direction they want to go with it, and the vision that their director has. There's a lot of different ways they could go with Carol. I have every faith that they'll do well by her. The films have been utterly fantastic," she said. "But without knowing anything about the film, the only thing that I could say that's new is, hey, yeah, female protagonist. I could not be more excited about that."

Back in 2012 when Deconnick first started writing Captain Marvel, the character was in a much different place. Carol Danvers went by Ms. Marvel, had a costume with no pants, and she had been doing some unhero-like things.

"I felt like my challenge was to nudge her character back to someone who would be easy to cheer for, someone who could carry a solo book and be indisputably the hero. So my pitch was, 'Carol Danvers as Chuck Yeager,'" Deconnick said. "She has kind of a dorky sense of humor that's a good, fun thing to play up with her. She's short-tempered; that's something most of us can relate to at one time or another in our lives. She means well. I think if you focus on that stuff and you focus on the fact that she's incredibly driven, she wants to win, she's unapologetic about wanting to win -- if you focus on all of that stuff, then she's an incredibly American hero. She's very easy to root for in that way. 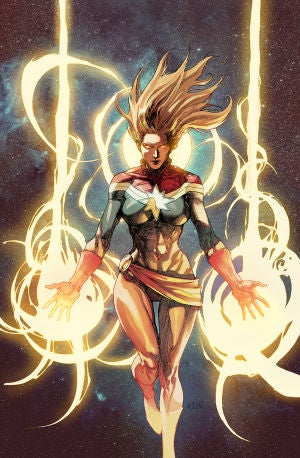 During our interview, Deconnick made clear that she did not create the Captain Marvel character -- Carol Danvers was created in 1968, got her powers in 1977, and became Captain Marvel in 2012. She explained that it was in fact her then-editor Steve Wacker who wanted to change the hero's name and give her a new costume -- a costume that artist Jamie McKelvie wound up designing. Still, for those who have read the comic, Deconnick has clearly done something right, otherwise the fan group known as the Carol Corps would not have sprung up with such big numbers among their ranks.

"The Carol Corps has been tremendous from day one," Deconnick said of the group known for dressing up as Captain Marvel at conventions, creating fan art featuring the revamped costume, and otherwise expressing their love for the comic. "The people who are drawn to this character are unsurprisingly very driven and very generous. The tone was established very early on that there would be no gatekeepers, that this would be a welcoming community and a charitable community. I love everything about that."

As for what Captain Marvel is up to in her monthly ongoing comic book series, Deconnick said that she is currently having adventures in space -- she recently made an appearance in The Guardians of the Galaxy comic -- and that the upcoming Captain Marvel #9 (out 11/12/14) is a great jumping-on point for anyone interested in getting into the comic. 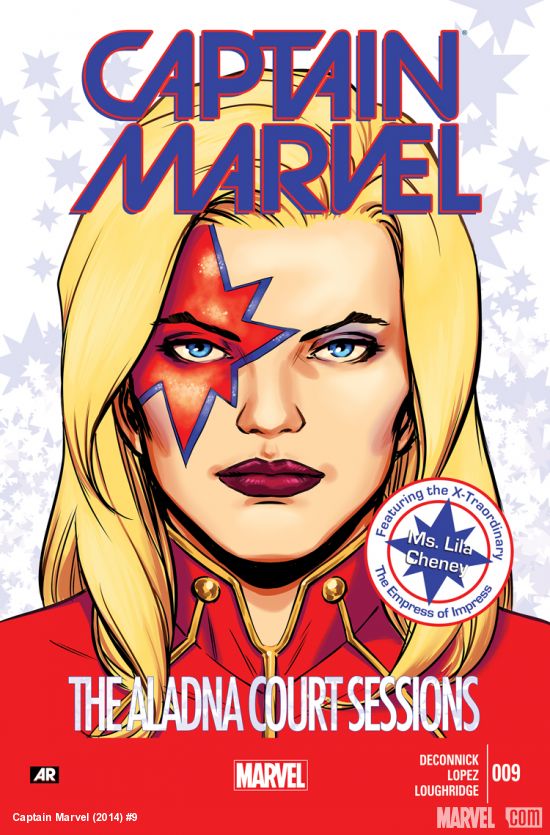 "It's a very fun one-shot issue that takes place on Lila Cheney's Dyson sphere. Lila Cheney is one of the X-Men. She's a mutant who has teleportation powers, and she has an abandoned Dyson sphere, which is sort of like a private mini-planet of her own, like an apartment out in space, that she takes Carol. She's Carol's sidekick for now too, and they have an encounter with the Royal Court of Aladna, a group that Lila had a run-in with when she was a child," Deconnick said. "[Captain Marvel is] not a big brain; she's a big fist. So I like to put her in situations where there are problems she can't punch, because it's hilarious to me. So Carol has to work this out diplomatically. Of course, it ends in punching." 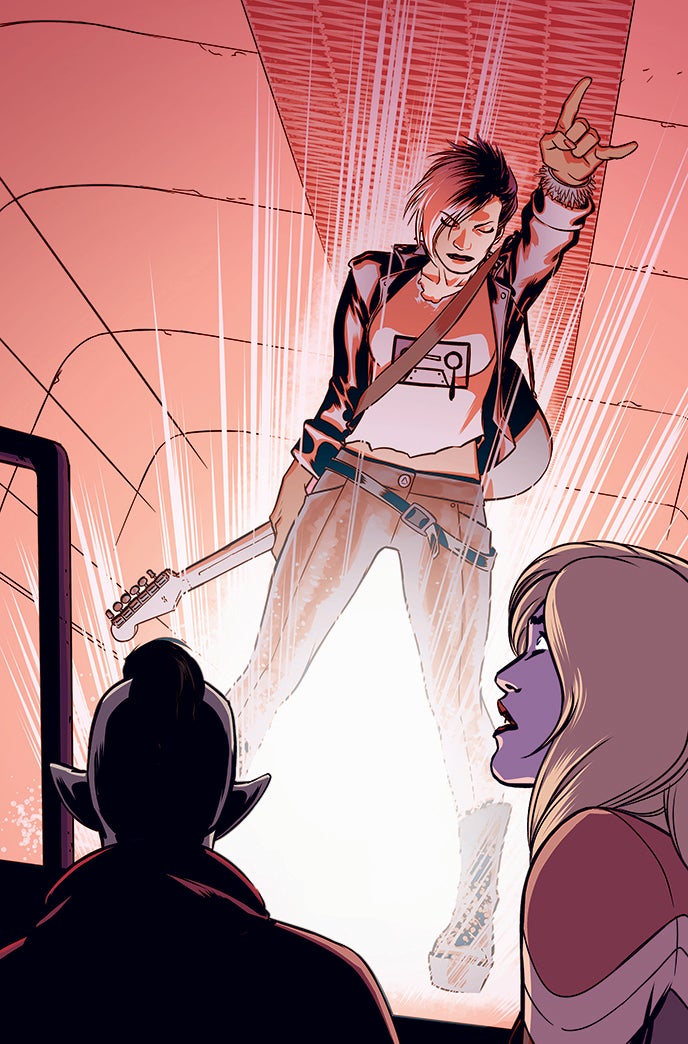 The actor playing Captain Marvel in the movie has yet to be cast, but Deconnick politely declined to say who she would choose for the role. However, she did offer some insight to how she envisions the character in real life.

"The voice in my head for Carol [is] Kathleen Turner from about 1984. I like how grounded her voice is. That's the Carol that lives in my head. There are a number of contemporary actresses who could bring a lot of really cool stuff to it. I'm really excited to see who they get. But whoever it is, I'll be first in line, no matter what."
0 · Share on Twitter
«1234»