Following the recruitment ban on foreign imports recently imposed by the NCAA, the UAAP is studying the implementation of a similar rule in the league.

The UAAP board has submitted a recommendation pending approval by the heads of the eight member universities proposing to ban the recruitment of foreign players for their varsity teams starting 2015.

This is due to growing concerns that Filipino players are not being developed properly due to the number of foreign players in the league. Presently, the UAAP allows two imports to play for each team. 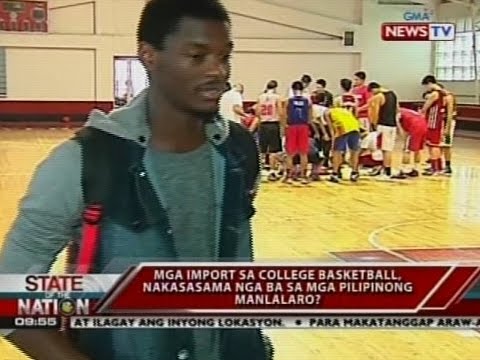 According to Ateneo de Manila University assistant coach and sports analyst Ronnie Magsanoc, a total ban on imports is unfair for the players.

"You cannot just erase them from the landscape because they also help in their own little way. Generating interest, also making sure yung following tumataas," Magsanoc told "State of the Nation" in an interview.

Rather than banning, Magsanoc believes that limiting the number of foreign players to one per team is a better option.

"This is also an opportunity for these foreign student-athletes to study. For as long they are student-athletes and not just mere athletes, then by all means, they should also be welcome," Magsanoc said.

University of the East import Moustapha Arafat said that the presence of foreign players like him is an advantage for the league.

"Because of some imports, the locals became really good," Arafat said.

For Arafat's teammate Dan Alberto, however, there is also a downside to getting the services of foreign players, especially to the locals who play as big men.

But for basketball analyst and former University of the Philippines player Xavi Nunag, the presence of imports in collegiate teams should be treated as a challenge rather than a disadvantage for Filipino players.

"Di naman sasabihin mo 'Oy may import, wala na ako sa team.' It can't be. It cannot be like that, you have to fight for what you want," Nunag said.

Due to the ban on imports in the NCAA, collegiate teams are making do with the foreign players they recruited before the rule was implemented by the league. Once these players graduate or finish their playing eligibility, the NCAA will be an all-Filipino league in five years.  Marisse Panaligan/JST, GMA News