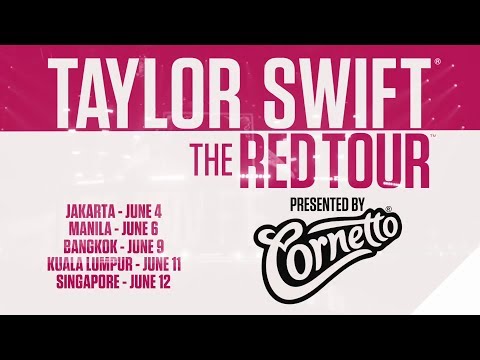 TAYLOR SWIFT TO BRING THE RED TOUR TO ASIA IN 2014

Nashville, TN  February 13, 2014  Seven-time GRAMMY winner Taylor Swift spent much of 2013 headlining sold-out stadiums and arenas in North America, Australia, and New Zealand on her blockbuster THE RED TOUR, and just this week finished a run of sold-out shows in London and Berlin. Taylor announced today that in response to strong fan demand she is taking the tour to Southeast Asia later this year, performing shows in Indonesia, the Philippines, Thailand, Malaysia and Singapore.

The Asian dates of Taylor Swifts THE RED TOUR Presented by Cornetto will include the following:

The Southeast Asia portion of The RED Tour is presented by Cornetto and promoted by AEG Live. The general public on-sale dates will vary by market, and pre-sale tickets will be available. General ticketing information will be available at www.taylorswift.com.

Taylor Swifts The RED Tour has earned universally high praise from top critics:
Rolling Stone -- A massively excellent show. Seeing Taylor Swift live in 2013 is seeing a maestro at the top of her or anyone's game. No other pop auteur can touch her right now for emotional excess or musical reach. Red [is] the slickest, smartest and just plain best mega-pop statement of our time. Seeing Taylor onstage now is seeing....total commitment, total fan fervor, total connection between audience and performer. A true arena-rock goddess at an amazing peak.

The New York Times -- A king-size spectacle, [whose] juxtapositions have power, one theatrical scene after the next. Taylor Swift off-script is very much like Taylor Swift on-script: not just the brains of the operation, but the brawn, too, the unflappable force that ensures stuck landings. Ms. Swifts voice is stronger than its ever been, and also sturdier.she sang vividly from behind a piano, show[ing] credible dark emotion.

The Times (London) -- Impressive. Taylor Swift offers a dream package, and she does it brilliantly.a perfect balance between professionalism and intimacy. The biggest thing in music.

The Guardian (London) -- Swift knows how to put on a show. Spectacular.

Last year, the North American portion of Taylors The RED Tour played to more than 1.36 million fans over 66 shows (including 13 stadium stops) in 47 cities in 29 states and 3 provinces spanning 6 months. Also in 2013, Taylor took her RED Tour Down Under -- performing stadium shows in Australia (as well as arena dates in New Zealand), becoming the first solo female artist in twenty years to undertake a national stadium concert tour of Australia. The tour has already visited Europe for six sold-out shows in 2014.

Taylor Swift, who writes all of her own songs, is a seven-time GRAMMY winner, and is the youngest winner in history of the music industrys highest honor, the GRAMMY Award for Album of the Year. She is the #1 digital music artist of all time, the only female artist in music history (and just the fourth artist ever) to twice have an album hit the 1 million first-week sales figure, and is the first artist since the Beatles (and the only female artist in history) to log six or more weeks at #1 with three consecutive studio albums. Taylor has an album on Rolling Stones prestigious The 50 Greatest Albums of All Time (by women) list, Time magazine has named her one of the 100 Most Influential people in the world, and she is Billboards youngest-ever Woman of the Year. Taylor, who is signed to Big Machine Records, has career record sales in excess of 26 million albums and 75 million song downloads worldwide, and has had singles top both the country and pop radio charts around the globe.