It was a sad farewell.
And very abrupt. Who would think KC Concepcion, now taking her acting chops seriously with her critically-acclaimed performance in Boy Golden, would decide to take a break from showbiz to concentrate on studies abroad?
On Instagram on Thursday, January 16, she made it official:
Goodbye for now, Manila! All set to take on a new adventure. (love, travel) #cloudimmigrant" 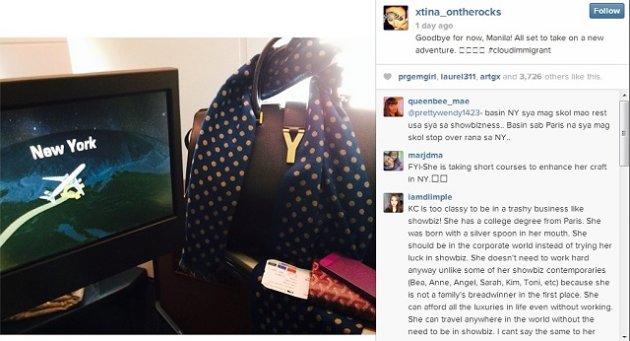 Obviously it is really more than what it seems.
The Dyesebel factor
KC had been primed up for the role of the reincarnated Mars Ravelo character Dyesebel. But in a sudden turn of developments (and fortunes), the role went to Anne Curtis, who had just emerged from that unfortunate controversy late last year.

KCs decision, which came immediately after the ABS-CBN announcement, was her apparent reaction. Although she never mentioned it in any of her recent social networking posts, media was quick to conclude this.
Who wouldnt? The suddenness is key, showing a hint of what went on in her mind that day of the announcement. But who could blame her?


KC is one of the most passionate actresses in the industry today and certainly very hardworking and serious about her craft. This even includes her endorsements.
A reliable source from her most recent endorsement, Sun Cellular, said the company was surprised at the professionalism she showed in their current engagement. KC, the source said, went to great lengths to know more about the company, down to the details of the promos and offerings, such as its inclusions, rewards and extensions. The source said KC was unique because she didnt want to be just a face of their product but a brand ambassador as well.
With her meticulous and resolute handling of whatever project or job given her, one can just imagine how KC dealt with the possibility of landing the Dyesebel role.


It isnt just talent
But just as roles come and go in showbiz, even if that was deemed for her, KC couldnt discount the fact that other factors came into play and that surely isnt all about talent. This is something KC should expect and accept, even with the high expectations she might have. Again, it boils down to professionalism and taking these things, such as being deprived of what she sees as a perfect role for her, in stride.


No, it doesnt mean KC should not pursue her studies abroadwhich people close to her reveal as courses to improve her craft. She must move on with her career, with probably a better role, a better project.
It doesnt stop with Dyesebel. KC proved in Boy Golden that she can do more than just portray a mermaid.
0 · Share on Twitter
«12»