The Honorable President,Bro.Ramon M.Gitamondoc and the Honorable Gentlemen of the Board of Governors,the Catholic Faith Defenders National Office

With heartfelt sadness i tell you all that fr. Abraham "abe" Arganiosa is not worthy anymore to be CFD Spiritual Director due to serious errors and offenses which he has blatantly and deliberately committed, and these with malicious intent..these are:

CANON 1390 #2..A person who calumniously denounces an offence to an ecclesiastical Superior or otherwise injures the good name of another,can be punished with just penalty, not excluding censure...#3..The calumniator can also be compelled to make appropriate amends

The circumstance is this:

Last August 12, 2012 at lunchtime fr.Abe Arganiosa told me with shameless derision in the presence of not less than CFD National President Ramon Gitamondoc that the reasons for his leaving the Somascan Orders are these:

1.His Superiors persecuted him and treated him unjustly and unfairly.
2.The Somascan priest who substituted his post in Aemillaneum College has a woman mistress in Dumaguete City.
3..That he has no money to support his family with the job and responsibility given to him by the Somascan Superiors!

This priest obviously is calumniating his Superiors, his priests substitute and his Order in this manner as he constantly circulates these calumny within the Splendor of the Church blog and fan page members, CFD members in Luzon chapters, his family and friends and anywhere he go and to whomoever he would talk to and inquire about his leaving his previous order,the Somascans.

WE AS CATHOLIC FAITH DEFENDERS SHOULD NOT TOLERATE SUCH CALUMNY AS THE SOMASCAN ORDERS ARE ALSO A PART AND A GREATER PART THAN FR.ABE HIMSELF OF THE ROMAN CATHOLIC HEIRARCHY! THESE ALONE WOULD MAKE HIM AN UNWORTHY SPIRITUAL DIRECTOR SINCE HE LACK IMPARTIALITY, HUMILITY AND THE CODE OF SILENCE HE BROKE OF WHAT HAPPENED TO HIM AND HIS SUPERIORS!

2. OFFENSES AGAINST RELIGION AND THE UNITY OF THE CHURCH

UNDER PENALTIES FOR PARTICULAR OFFENCES in the New Code of Canon Law 1983 states thus:

CANON 1364
#1.An apostate from the faith,a HERETIC or a schismatic incurs a LATAE SENTENTIAE excommunication,without prejudice to the provision of Canon 194 #1,n.2; a cleric,moreover,maybe punished with the penalties mentioned in Canon 1336 #1,2 and 3..

#2..If a longstanding contempt or the gravity of scandal calls for it,other penalties may be added, not excluding dismissal from the clerical state

CANON 1369
A person is to be punished with just penalty,who ,at a public event or assembly, or in a PUBLISHED WRITING, or by otherwise using the MEANS OF SOCIAL COMMUNICATION,UTTERS BLASPHEMY, or gravely harms public morals,or rails at or excites hatred of or contempt for religion or the Church.

THE CIRCUMSTANCE IS THIS:

FR.ABE ARGANIOSA PERSONALLY HOLDS,DEFENDS,AND PUBLISHED HIS HERETICAL DOCTRINE THAT THE DIVINITY OF CHRIST DIED AND WAS AFFECTED WITH HIS DEATH ON THE CROSS TO EFFECT HUMAN SALVATION!

this my CFD brothers is shameful, deplorable,shocking and blasphemous to pious ears of all of us faithful Catholics! First he propsed this heresy and together with Marwil Llasos defended this on the Apologia Forum, a public assembly of apologists of the Defensores Fidei Foundation Group in Manila..he debated with mr.Redentor de la Rosa on that forum and mr.de la Rosa has this debate and exchange recorded on his blog! as of this time fr.Abe Arganiosa refuses to repudiate, condemn and negate this damnable and blasphemous heresy and instead affirms it,teaches it,and defends it in groups and pages on the internet giving doubts to the Catholic faithful and promoting disunity! I myself almost year ago debated with him on this issue which was finally refuted by former President Atty.Miguel"mike" Abas on the new Catholic Faith Defenders Journal Vol.1 1st issue last year.

ACCORDING TO CANON LAW HE IS ON A STATE OF LATAE SENTENTIAE! AUTOMATIC EXCOMMUNICATION WITHOUT NEED OF DECLARATION BY A LOCAL ORDINARY OF HIS DAMNABLE AND BLASPHEMOUS HERESY AGAINST OUR LORD AND GOD JESUS CHRIST AND HE HAS GOOD COMPANY IN THE CATHOLIC FAITH DEFENDERS DAVAO CHAPTER LIKE ISAHEL ALFONSO, JUB ALABASTRO,RYAN MEJILLANO AND JOHN DIONA AND MANY OTHERS! I CALL UPON YOU HONORABLE GENTLEMEN TO CONDEMN THIS HERESY AT ONCE AND IMPOSE A PENALTY ON FR.ABE ARGANIOSA DISALLOWING HIM FOR LIFE TO BECOME PART OF THIS HONORABLE ORGANIZATION THE CATHOLIC FAITH DEFENDERS INC PHILIPPINES!

IN THE CONSTITUTION AND BY-LAWS OF THE CATHOLIC FAITH DEFENDERS ARTICLE 3 SECTION 6 Grounds for Disqualification--the following are the grounds for disqualification oF any member:.

WHEN HE OPENLY AND PUBLICLY ADHERES TO AN ESTABLISHED AND RECOGNIZED HERESY. WHEN HE COMMITS AN ACT OFFENSIVE TO THE CATHOLIC CHURCH OR TO THE ORGANIZATION

by god we are an apologetics organization tasked to defend our faith and we cannot by all means admit a priest to be our national spiritual director who is himself a HERETIC! GOD FORBID!

3. TECHNICAL, JURIDICAL AND CANONICAL IMPOSSIBLITY OF BEING NATIONAL SPIRITUAL DIRECTOR OF AN APOLOGETICS ORGANIZATION WHOSE MEMBERS AND HEADQUARTERS ARE RESIDING AND IS LOCATED IN THE PHILIPPINES AND HE BEING EXCARDINATED HERE AND NOW INCARDINATED LAST OCTOBER IN SAN ANTONIO ,TEXAS,USA

this is the circumstance:

fr.Abe four months before incardination (Canon 268 of the new Code of Canon law) in the US did not reveal this fact to the CFD National Board in his malicious intent to decieve everybody

.#1 A private association of Christ's faithful can freely designate for itself a moderator and officers, in accordance with the statutes.

#2..If a private association of Christ's faithful wishes to have a spiritual counsellor(director), it can freely choose one for itself FREOM AMONG THE PRIESTS WHO LAWFULLY EXERCISE A MINISTRY IN THE LOCAL DIOCESE, BUT THE PRIEST REQUIRES THE CONFIRMATION OF THE LOCAL ORDINARY

Moderation of lay associations are to ensure that the members receive due formation, so that they may carry out the apostolate which is proper to the laity

#1 An ecclesiastical office spiritual directorship in fr.abe's case) is lost on the expiry of a pre-determined time; on reaching the age limit by law; by resignation; BY TRANSFER; by removal; by deprivation..

fr.Abe Arganiosa"s stubborn and forceful intent to still function as spiritual director of CFD violates the requirement for proper residency and personal presence and incurs the OFFENCES AGAINST SPECIAL OBLIGATIONS AS stipulated on CANON 1396 which states thus.

A person who gravely violates the obligation of RESIDENCE to which he is bound by reason of an ecclesiastical office (being spiritual director of CFD-Philippines when he is already residing in the diocese of San Antonio, Texas,USA), IS TO BE PUNISHED WITH A JUST PENALTY, NOT EXCLUDING,AFTER WARNING,DEPRIVATION OF THE OFFICE.

# 1..Deprivation of office, that is, as a punishment for an offence, may be effected only in accordance with the law.

#2..Deprivation takes effect in accordance with the provisions of the canons concerning penal law.

WITH THIS OBVIOUS FACT FR.ABRAHAM ABE ARGANIOSA DELIBERATELY DISOBEYS THIS FUNDAMENTAL REQUIREMENT OF THE CANON LAW AND HE IS THEREFORE BE PENALIZED WITH IMMEDIATE REMOVAL FROM OFFICE OR DEPRIVATION OF SUCH OFFICE, HONOR, PRIVELEGES AND BENEFITS AS NATIONAL SPIRITUAL DIRECTOR OF CATHOLIC FAITH DEFENDERS PHILIPPINES WHOSE HEADQUARTERS IS LOCATED AT THE ARCHDIOCESE OF CEBU CITY, PHILIPPINES!!

BECAUSE OF HIS HATE ON ME HE POSTS ON HIS BLOG MY WARRANT OF ARREST WHICH WAS SERVED, BAILED AND RELEASED LAST 2010 IN A CASE CLOSED DUE TO LACK OF SUFFICIENT EVIDENCE TO CONVICT BEYOND REASONABLE DOUBT ONLY SHOWS HOW HATEFUL HE IS AS A PRIEST OF GOD! HOW PROUD HE IS! POLEMICAL AND RESORTS TO AD HOMINEM TACTICS AS HE IS BANKRUPT OF ARGUMENT FROM MY CONSTANT CHALLENGE TO HIM TO FACE ME IN A FAIR AND MANLY DEBATE!

IN HIS BLOG ,SPLENDOR OF THE CHURCH AND HIS GROUP AND FAN PAGE OF THE SAM NAME HE ATTACKS IGLESIA NI CRISTO MEMBERS AS MANOLISTANG PULPOLS! CALLS NONCATHOLICS FOOLS, PATHETIC IDIOTS, CLOWNS AND MANY OTHERS TERMS WHJICH SHOULD BE UNBECOMING FROM THE MOUTH OF A PRIEST WHO SHOULD TEACH SOUND WORDS OF DOCTRINES AND KNOWLEDGE--MALACHI 2:7
source: facebook of CFD Alvin Gitamondoc 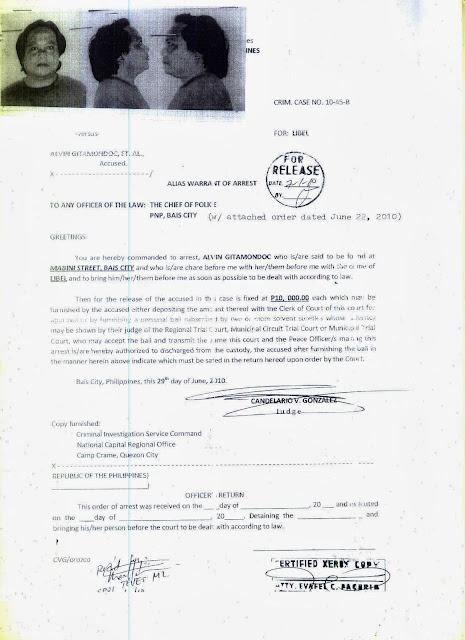 For the past several months many Catholic Apologists have suffered attacks and malicious accusations from this guy. People with good reputations and honorable members of the Society are being maligned by this person and when confronted or requested to stop his evil works the more he intensifies in his ways of error.
We hereby inform our people that this man is answerable to the law of men and ultimately of God. Soon, the wheel of justice shall grind on him. More warrant of arrest is forthcoming if he will not change his evil ways. Like Lucifer who fell out of grace from heaven this guy can no longer go lower. Hope and pray that he finds his way back to the realm of light for his own good and for the salvation of his soul.