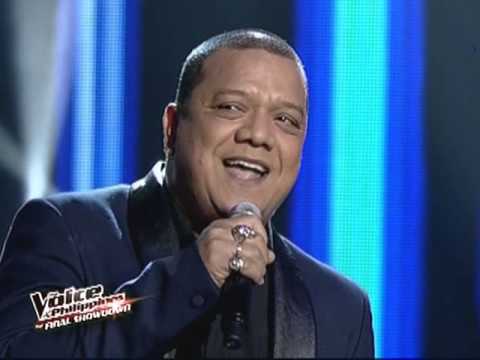 MANILA  (2nd UPDATE) Veteran band vocalist Mitoy Yonting was named the first-ever winner of The Voice of the Philippines on Sunday during the hit TV shows grand finale at Resorts World Manila.

Yonting, 42, a member of Team Lea, received 57.65% of the votes to beat Team Sarah's Klarisse de Guzman as the two artists faced off for a final showdown after garnering the highest percentage of text and online votes plus iTunes and truetone downloads.

Before the poll for the top two artists opened, their individual scores were reset to zero. In the end, the artist who got the higher percentage of public votes was named the winner of The Voice of the Philippines.

Team Bamboo's Myk Perez and Team Apl's Janice Javier were the other two contestants in the Top 4 in the much-awaited finale of ABS-CBNs hit talent search.

According to The Voices official Twitter account, Perez and Javier got 13.56% and 12.81% of the votes, respectively, before scores were reset for Yonting and de Guzman.

Salamat sa inyong lahat, an emotional Yonting told the ecstatic crowd before doing a reprise of his Top 2 performance of The Beatles Help.

Before he was announced as the first winner of the local version of The Voice, his coach Lea Salonga thanked Yonting for giving her the opportunity to help someone as gifted, as talented and as amazing as you.

Maraming salamat sa pagpili, for letting me into your heart and for allowing me to help you along this journey, she said. Sana in the rest of your journey, you will allow me to look over your shoulder and watch over you.

The vocalist of the band The Draybers, Yonting established himself among the shows early favorites and most popular contestants during the Blind Auditions, where he sang the 70s OPM hit "Bakit Ako Mahihiya."

Known for his high, effortless voice and energetic performances, Yonting easily progressed on the show after engaging Chien Berbana in the Battle Rounds with "Alone." He electrified the Resorts World Manila crowd during his first live performance with Queens theatrical Dont Stop Me Now, exuding a confidence honed by many years of band experience.

In the succeeding live shows, Yonting also showed his quieter side with restrained performances of "Paano," "Against All Odds," and "The Power of Love."

In Saturdays final competition, Yonting chose to do a rock version of Freddie Aguilars classic Anak, with Salonga proclaiming, You are the most deserving person right now for the title, you are the voice of the Philippines.

His original song, Bulag, has also been a best-seller on iTunes, consistently ranking in the Top 5 downloads in the Philippines.

Yontings victory capped a star-studded finale for the successful TV talent show, which topped the worldwide trending topics of micro-blogging site Twitter during its two-part grand finale. By the end of Sundays show, The Voice of the Philippines occupied all 10 spots in the local trending Twitter topics.

Journey frontman Arnel Pineda and champion singer Jed Madela opened Sundays show with the Top 24 artists of The Voice of the Philippines, in a rocking mash-up of We Will Rock You and I Love Rock and Roll.

The four coaches also had their own production number with Michael Jacksons inspirational anthem Man in the Mirror.
0 · Share on Twitter
«12»