gingerbread2011 PExer
August 2012 in Realm of Thought
"Evolution" mixes two things together, one real, one imaginary. Variation (microevolution) is the real part. The types of bird beaks, the colors of moths, leg sizes, etc. are variation. Each type and length of beak a finch can have is already in the gene pool and adaptive mechanisms of finches. Creationists have always agreed that there is variation within species. What evolutionists do not want you to know is that there are strict limits to variation that are never crossed, something every breeder of animals or plants is aware of. Whenever variation is pushed to extremes by selective breeding (to get the most milk from cows, sugar from beets, bristles on fruit flies, or any other characteristic), the line becomes sterile and dies out. And as one characteristic increases, others diminish. But evolutionists want you to believe that changes continue, merging gradually into new kinds of creatures. This is where the imaginary part of the theory of evolution comes in. It says that new information is added to the gene pool by mutation and natural selection to create frogs from fish, reptiles from frogs, and mammals from reptiles, to name a few.

Do these big changes (macroevolution) really happen? Evolutionists tell us we cannot see evolution taking place because it happens too slowly. A human generation takes about 20 years from birth to parenthood. They say it took tens of thousands of generations to form man from a common ancestor with the ape, from populations of only hundreds or thousands. We do not have these problems with bacteria. A new generation of bacteria grows in as short as 12 minutes or up to 24 hours or more, depending on the type of bacteria and the environment, but typically 20 minutes to a few hours. There are more bacteria in the world than there are grains of sand on all of the beaches of the world (and many grains of sand are covered with bacteria). They exist in just about any environment: hot, cold, dry, wet, high pressure, low pressure, small groups, large colonies, isolated, much food, little food, much oxygen, no oxygen, in toxic chemicals, etc. There is much variation in bacteria. There are many mutations (in fact, evolutionists say that smaller organisms have a faster mutation rate than larger ones16). But they never turn into anything new. They always remain bacteria. Fruit flies are much more complex than already complex single-cell bacteria. Scientists like to study them because a generation (from egg to adult) takes only 9 days. In the lab, fruit flies are studied under every conceivable condition. There is much variation in fruit flies. There are many mutations. But they never turn into anything new. They always remain fruit flies. Many years of study of countless generations of bacteria and fruit flies all over the world shows that evolution is not happening today.

Mutation - natural selection
Here is how the imaginary part is supposed to happen: On rare occasions a mutation in DNA improves a creature's ability to survive, so it is more likely to reproduce (natural selection). That is evolution's only tool for making new creatures. It might even work if it took just one gene to make and control one part. But parts of living creatures are constructed of intricate components with connections that all need to be in place for the thing to work, controlled by many genes that have to act in the proper sequence. Natural selection would not choose parts that did not have all their components existing, in place, connected, and regulated because the parts would not work. Thus all the right mutations (and none of the destructive ones) must happen at the same time by pure chance. That is physically impossible. To illustrate just how hopeless it is, imagine this: on the ground are all the materials needed to build a house (nails, boards, shingles, windows, etc.). We tie a hammer to the wagging tail of a dog and let him wander about the work site for as long as you please, even millions of years. The swinging hammer on the dog is as likely to build a house as mutation-natural selection is to make a single new working part in an animal, let alone a new creature. 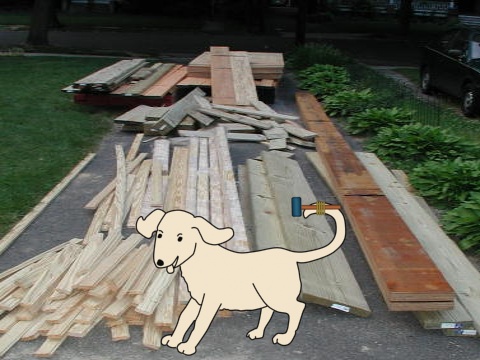 Believing in beneficial mutations is like believing a short-circuit in the motherboard of your computer could improve its performance. To make any lasting change, a beneficial mutation would have to spread ("sweep") through a population and stay (become "fixed"). To evolutionists, this idea has been essential for so long that it is called a "classic sweep", "in which a new, strongly beneficial mutation increases in frequency to fixation in the population." Some evolutionist researchers went looking for classic sweeps in humans, and reported their findings in the journal Science. "To evaluate the importance of classic sweeps in shaping human diversity, we analyzed resequencing data for 179 human genomes from four populations". "In humans, the effects of sweeps are expected to persist for approximately 10,000 generations or about 250,000 years." Evolutionists had identified "more than 2000 genes as potential targets of positive selection in the human genome", and they expected that "diversity patterns in about 10% of the human genome have been affected by linkage to recent sweeps." So what did they find? "In contrast to expectation," their test detected nothing, but they could not quite bring themselves to say it. They said there was a "paucity of classic sweeps revealed by our findings". Sweeps "were too infrequent within the past 250,000 years to have had discernible effects on genomic diversity." "Classic sweeps were not a dominant mode of human adaptation over the past 250,000 years." --Hernandez, Ryan D., Joanna L. Kelley, Eyal Elyashiv, S. Cord Melton, Adam Auton, Gilean McVean, 1000 Genomes Project, Guy Sella, Molly Przeworski. 18 February 2011. Classic Selective Sweeps Were Rare in Recent Human Evolution. Science, Vol. 331, no. 6019, pp. 920-924.

A 35-year experiment by evolutionists shows how things really work. Instead of waiting for natural selection, researchers forced selection on hundreds of generations of fruit flies. They used variation to breed fruit flies that develop from egg to adult 20% faster than normal. But, as usual when breeding plants and animals, there was a down side. In this case the fruit flies weighed less, lived shorter lives, and were less resistant to starvation. There were many mutations, but none caught on, and the experiment ran into the limits of variation. They wrote that "forward experimental evolution can often be completely reversed with these populations". "Despite decades of sustained selection in relatively small, sexually reproducing laboratory populations, selection did not lead to the fixation of newly arising unconditionally advantageous alleles." "The probability of fixation in wild populations should be even lower than its likelihood in these experiments." --Burke, Molly K., Joseph P. Dunham, Parvin Shahrestani, Kevin R. Thornton, Michael R. Rose, Anthony D. Long. 30 September 2010. Genome-wide analysis of a long-term evolution experiment with Drosophila. Nature, Vol. 467, pp. 587-590.

Microevolution - Macroevolution
This candid admission is from the evolutionist journal Nature: "Darwin anticipated that microevolution would be a process of continuous and gradual change. The term macroevolution, by contrast, refers to the origin of new species and divisions of the taxonomic hierarchy above the species level, and also to the origin of complex adaptations, such as the vertebrate eye. Macroevolution posed a problem to Darwin because his principle of descent with modification predicts gradual transitions between small-scale adaptive changes in populations and these larger-scale phenomena, yet there is little evidence for such transitions in nature. Instead, the natural world is often characterized by gaps, or discontinuities. One type of gap relates to the existence of 'organs of extreme perfection', such as the eye, or morphological innovations, such as wings, both of which are found fully formed in present-day organisms without leaving evidence of how they evolved."-- Reznick, David N., Robert E. Ricklefs. 12 February 2009. Darwin's bridge between microevolution and macroevolution. Nature, Vol. 457, pp. 837-842.

Gradual change versus leaps
There are two versions of evolution theory. The main version proposes that many tiny changes over millions of years made new creatures. It is called the Modern Synthesis or Neo-Darwinian evolution.

But "major transitions in biological evolution show the same pattern of sudden emergence of diverse forms at a new level of complexity." "The principal 'types' seem to appear rapidly and fully equipped with the signature features of the respective new level of biological organization. No intermediate 'grades' or intermediate forms between different types are detectable."20

Since the fossil record does not show tiny changes between one type of creature and another, a few evolutionists proposed a modification to evolution theory. It says that change occurred by occasional leaps (punctuated equilibrium), not gradually. However, each hypothetical beneficial mutation could only make a slight change. Any more than that would be so disruptive as to cause death. So punctuated equilibrium is not really about big leaps. It envisions a lot of slight changes over thousands of years, then nothing happens for millions of years. Evolutionists say with a straight face that no fossils have been found from a leap because thousands of years is too fast in the billions of years of "geologic time" to leave any. On the other hand, without fossils there is no evidence that any leaps ever happened, and of course there is no evidence that leaps or gradual changes beyond variation are happening today in any of the millions of species that still exist.


Evolution is all about constant change, whether gradual or in leaps. Consider a cloud in the sky: it is constantly changing shape due to natural forces. It might look like, say, a rabbit now, and a few minutes later appear to be, say, a horse. In between, the whole mass is shifting about. In a few more minutes it may look like a bird. The problem for evolution is that we never see the shifting between shapes in the fossil record. All fossils are of complete animals and plants, not works in progress "under construction". That is why we can give each distinct plant or animal a name. If evolution's continuous morphing were really going on, every fossil would show change underway throughout the creature, with parts in various stages of completion. For every successful change there should be many more that lead to nothing. The whole process is random trial and error, without direction. So every plant and animal, living or fossil, should be covered inside and out with useless growths and have parts under construction. It is a grotesque image, and just what the theory of evolution really predicts. Even Charles Darwin had a glimpse of the problem in his day. He wrote in his book On the Origin of Species: "The number of intermediate varieties which have formerly existed on Earth must be truly enormous. Why then is not every geological formation and every stratum full of such intermediate links? Geology assuredly does not reveal any such finely graduated organic chain; and this, perhaps, is the most obvious and gravest objection which can be urged against my theory." The more fossils that are found, the better sense we have of what lived in the past. Since Darwin's day, the number of fossils that have been collected has grown tremendously, so we now have a pretty accurate picture. The gradual morphing of one type of creature to another that evolution predicts is nowhere to be found. There should have been millions of transitional creatures if evolution were true. In the "tree of life" that evolutionists have dreamed up, gaps in the fossil record are especially huge between single-cell creatures, complex invertebrates (such as snails, jellyfish, trilobites, clams, and sponges), and what evolutionists claim were the first vertebrates, fish. In fact, there are no fossil ancestors at all for complex invertebrates or fish. That alone is fatal to the theory of evolution. The fossil record shows that evolution never happened.