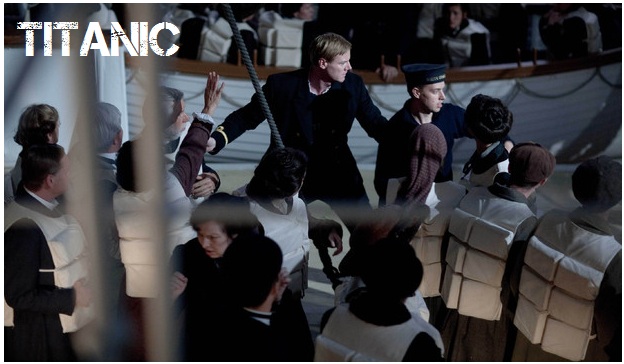 Hugh, Earl of Manton (Linus Roache)
Head of the Manton family, with the confidence and charm born of several centuries of aristocratic breeding. But his past contains an unexpected secret.

Louisa, Countess of Manton (Geraldine Somerville)
Hughs wife, whose aristocratic Anglo-Irish family background causes an instant chemical reaction in Muriel Batley. Her relationship with her daughter Georgiana is
not made easier by their similarities.

Lady Georgiana Grex (Perdita Weeks)
The Mantons daughter. She has inherited her mothers self assurance, but she still has the impetuousness of youth. Her involvement with the Suffragette movement, and her arrest during one of their demonstrations, make it a matter of urgency for her parents to spirit her away to New York.

Barnes (Lee Ross)
Lord Mantons valet. Hes easy going, resourceful and generous, but he is an infuriating presence for...

Watson (Lyndsey Marshal)
Lady Mantons ladys maid, whose sense of what is right and proper does not include what she considers to be Barness lack of standards. But Watson, like Lord Manton, has a secret.

Paolo Sandrini (Glen Blackhall)
One of the many Italians who left their native country in the twentieth centurys first decade to better their prospects. He is desperate to find a way to accompany his brother Mario to the New World, where he dreams of a new life.

Mario Sandrini (Antonio Magro)
Paolos brother, a stoker on Titanic, who manages to blag his brother on to the ship as a steward. Marios practical approach to life contrasts with his brothers dreams.

Annie Desmond (Jenna Louise Coleman)
A young stewardess in Second Class. She is one of Paolos dreams, and despite their contrasting temperaments and his unorthodox approach, there is something about him that attracts her.

John Batley (Toby Jones)
An Irish lawyer who moved to London as a young man with the world at his feet and joined the distinguished firm that handles Lord Mantons affairs. But things have not worked out as he would have wished, and he has had to settle for a role as a discreet and trusted servant of the aristocracy.

Muriel Batley (Maria Doyle Kennedy)
Johns Irish wife has had her dreams crushed by the failure of his career and their inability to have a child. A life in Croydon is not what she anticipated, and she has found his role as the errand boy of her countrys historic oppressors increasingly hard to bear. The trip to New York, albeit in Second Class, promises to be a welcome respite, but the encounter with the patrician Lord Manton and his Anglo-Irish wife is for her the final straw.

Jim Maloney (Peter McDonald)
A Belfast engineer working on the Titanics fitting out. He sees no future for his family as Catholics in the fervently Protestant Ulster, despite the imminent arrival in the House of Commons of the third attempt at an Irish Home Rule Bill. His expertise in the new art of electrical wiring leads to an unexpected offer of a free passage to New York. The drawback is that its in steerage...

Mary Maloney (Ruth Bradley)
Jims attractive and loyal wife. Shes used to following Jims lead, and she accepts the uprooting of her family and the discomfort of a steerage passage with their four young children with equal grace. But she is about to have an encounter that will turn her life upside down.

Peter Lubov (Dragos Bucur)
A dark and charismatic stranger described by Officer Lightoller as looking like the wandering prophet. He is determined to leave behind the violent social upheaval in Europe in which he has played a part, but his past is about to catch up with him.

Grace Rushton (Celia Imrie)
A member of the new industrial class, whose rise to power and wealth over the previous decade has unsettled the hegemony of the landed aristocracy. Travelling with her husband Joseph and her Pekinese Suki, she is regarded with barely disguised horror by the old money in First Class.

Harry Widener* (Noah Reid)
The son of an immensely wealthy Philadelphia family, travelling back to the US with his parents. He is immediately attracted to the headstrong and impulsive Georgiana, and his intelligence and humour prove a good foil for her self-confident impetuosity.

Thomas Andrews* (Stephen Campbell Moore)
The nephew of Harland and Wolffs chairman, Lord Pirrie, Andrews replaced Alexander Carlisle as Titanics designer. He is concerned about some of the design and quality control issues  amongst them the reduction in the number of lifeboats 70 from Carlisles original plans  but his misgivings are swept aside by Bruce Ismay and the need to have Titanic ready for her maiden voyage.

Bruce Ismay* (James Wilby)
Chairman of the White Star Line, one of the foremost companies in the golden age of the transatlantic crossing, and the owners of Titanic, the worlds largest and most technically advanced ocean liner,. His conduct on the night of 15 April 1912 will earn him the tabloid soubriquet the Coward of the Titanic and effectively end his career.

Lord Pirrie* (Timothy West)
Lord Pirrie is the chairman of Titanics builders Harland and Wolff. A hard taskmaster, but also a Liberal and a supporter of Home Rule, he employs Catholics as well as Protestants in his shipyard despite strong opposition in Belfast. But his overriding concern is to have Titanic fitted out in time for her sea trials and the maiden voyage that is due to follow only a few days later.

John Jacob Astor* (Miles Richardson)
The immensely wealthy American, part of the old money society whose familys riches were accumulated a century before in opium, fur and real estate. He is travelling with his pregnant young wife Madeleine  their marriage came as rather a shock after his divorce from his first wife Ava, and they are returning to the USA in the hope that their extended honeymoon in Europe and Egypt will have allowed things to calm down.

Benjamin Guggenheim* (David Eisner) and Madame Aubart* (Joséphine de La Baume)
Guggenheim is another American of great wealth, this time from his fathers mining empire. Guggenheim is openly travelling with his French mistress, Madame Aubart, a cause of much scandal. Guggenheims stoical and ironic response to the events of 15 April 1912 will make him a legend in Titanic folklore.

Dorothy Gibson* (Sophie Winkleman)
The 22-year-old Dorothy Gibson established herself the year before as one of the first stars of the silent movie era, with such popular hits as Miss Masquerader and Hands Across the Sea. She is travelling back to the USA with her mother after a vacation in Italy. Within a month of the disaster, she will have written and starred in Saved from the Titanic, playing herself.

Margaret Molly Brown* (Linda Kash)
Dubbed the Unsinkable Molly Brown after her death thanks to her exploits in one of Titanics lifeboats, Margaret Browns fortune was made when the engineering skills of her husband JJ helped his company strike gold. By the time of her trip on Titanic she is already a well-known philanthropist, and she, like Benjamin Guggenheim, has entered Titanic folklore.

Bessie Allison* (Olivia Darnley)
A young American mother travelling in First Class with her husband Hudson, young daughter Loraine and baby Trevor. When the evacuation begins, she is separated from baby Trevor, who is in the care of nanny Alice Cleaver, and refuses to leave the ship until he can be found.

Captain Smith* (David Calder)
Captain Edward J. Smith is an experienced and distinguished sea captain, whose many commands include that of Titanics sister ship Olympic. However, evidence suggests that his desire to complete a successful maiden voyage by docking early in New York will lead to Titanic maintaining a speed that will prove unwise amidst the
Atlantic ice floes.

Chief Officer Wilde* (Will Keen)
Wilde was Chief Officer for Captain Smith in Olympic, and is drafted in at the last minute to fulfil the same role on Titanic at Captain Smiths behest. This sudden change of personnel causes the so-called officer reshuffle, which reassigns the rank and duties of the other officers just before the ship sails  not helpful when disaster strikes.

First Officer Murdoch* (Brian McCardie)
Previously Chief Officer, Murdoch finds himself demoted to First Officer when Henry Wilde is brought in on the pretext of his previous experience in Olympic  despite the fact that Murdoch too has sailed as an officer in that same ship. Murdoch is the officer in charge on the bridge when Titanic encounters the iceberg.

Second Officer Lightoller* (Steven Waddington)
Famously portrayed by Kenneth More in A Night to Remember, Officer Charles Lightoller is regarded as one of the heroes of Titanic thanks to his diligence and his calm demeanour during the evacuation. It is a deserved reputation, but he is also responsible for the loading policy that will send the lifeboats down at well under their full capacity, with a significant effect on the number of passengers offloaded.

Fifth Officer Lowe* (Ifan Meredith)
The young Fifth Officer is celebrated for gathering several lifeboats together into a pontoon, in order to empty one and return in it to search for survivors, despite the fears that anyone doing so might be swamped by hordes of the drowning.

Titanic is a serial created by BAFTA-winning producer Nigel Stafford-Clark (Warriors; The Way We Live Now; Bleak House) and written by Oscar and Emmy winner Julian Fellowes (Gosford Park; Downton Abbey) to mark the hundredth anniversary of the worlds most famous maritime disaster in April 1912. It sets out to tell the story not just of a single ship, but of an entire society  one that was heading towards its own nemesis in the shape of the First World War as carelessly as Titanic towards the iceberg. All human life is on Titanic as she sets out on her maiden voyage. The upper-class family with their suffragette daughter and their warring servants; the wealthy elite of American society; the Irish lawyer in Second Class with his embittered wife; the young cabin steward and the impetuous Italian waiter who falls for her; the Catholic engineer fleeing Belfast with his wife and family to escape the sectarian conflict; the mysterious stranger in Steerage fleeing who knows what. And then there are the officers and crew. As their stories interweave and we find our first impressions are often undermined by what we learn, there is one thing that we know for certain and they do not. That not all of them will survive.