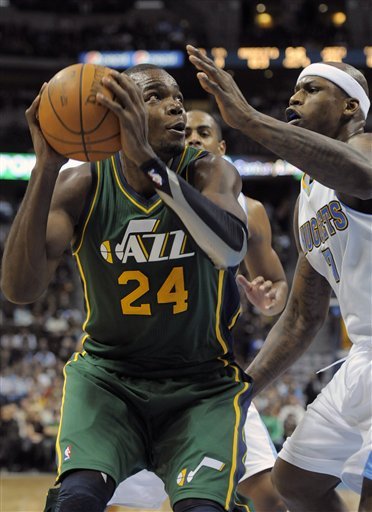 The Utah Jazz are currently tied for 4th in the West and are 6-1 at home. They have a better record than 4 playoff teams from last year  Portland, Denver, Dallas and Memphis. By all indications, theyve exceeded early expectations.

This is not really how it should be, right? I mean, on paper, the post-D-Will Jazz should be struggling just as bad or worse than, say, the Minnesota Timberwolves, who have two potential All-Stars in double-double monster Kevin Love and the wildly popular, not to mention flashy, Ricky Rubio. But the Jazz are 4 games ahead of the T-Wolves and have been more impressive all throughout.

Al Jefferson and Paul Millsap are chiefly to blame. Neither of them will probably get a nod for the All-Star game, but theyve been rock solid down low for coach Ty Corbin. In a combined 62 minutes per game, the dynamic duo has produced roughly 34 points, 17 rebounds, 3 blocks and 3 steals per game. Theyre also shooting a combined 52% from the floor.

By the numbers, Al-Jeff and Millsaps scoring has actually dipped a little bit this season, same with Devin Harris and CJ Miles. Utah is in the Top 10 in only 3 categories  FG%, blocks per game and turnovers per game. Not exactly a meteoric rise from last season.

So far, though, those good-but-not-quite-great stats have been enough to make some pundits turn their heads. All of a sudden, Memphis, the toast of the previous postseason for its grit and unwavering spirit, might be the odd man out. Granted its still too early, but the way the team has been playing, Utah is certainly jazzing things up.

GSW over DET, 99-91  Warriors bounce back after losing to the Cats, getting one on the road even as Greg Monroe pumps in 25 points for the Pistons.
UTA over DEN, 106-96  Potential playoff teams match up with the frontline duo of Paul Millsap and Al Jefferson wreaking havoc for the Jazz.
SAS over PHX, 102-91  TD turns back time and drops a double-double on the flickering Suns.

Sharpshooters (Top 3-point shooters of the night!)
Ben Gordon (DET)  3
A LOT with 2


For a full summary of the day, heres todays NBA Daily Zap.