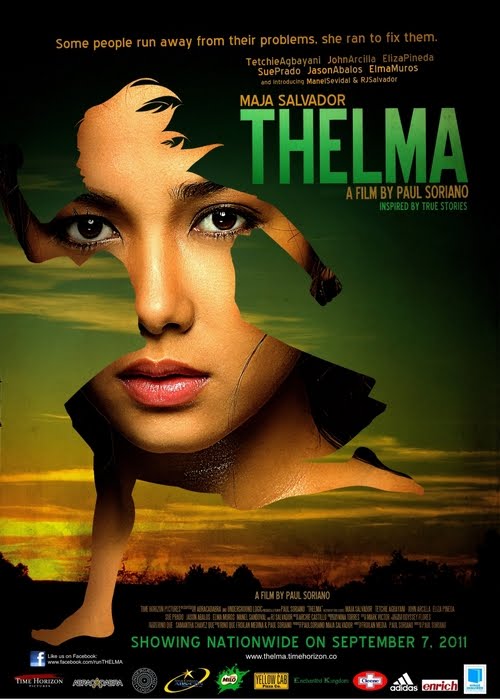 If you are hungry for a quality Filipino film, Thelma will satisfy that craving.

Thelma indeed has caused a wild curiosity among cinephiles when the trailer came out, giving us a glimpse of a seemingly unique and refreshing Filipino film released by Star Cinema with TimeHorizon Pictures. So are you wondering whether your curiosity is worth buying a ticket? The answer is a yes. Exchange it for a fast food meal, if you must.

In a remote part of Ilocos Norte, under the wide open sky, with windmills and mountains and sunsets and starlit nights, live a farmer and his poor family-- with a stubborn, rambunctious but deeply compassionate eldest child, Thelma (Maja Salvador), with an extraordinary talent in running. Lacking in school spirit and discipline, Thelma only finds joy with her younger sister's company in the raw beauty of their Ilocos Norte home, running wild and free without any cares in the world.

But an unexpected tragedy drove Thelma's life perspective to change and for her to strip her fears and lack of discipline away, and use her gift of running. And we follow how far her feet would take her.

Inspired by true events, Thelma is fast-paced, heartfelt, touching and unpretentious, with an engaging storyline that will hook you to finish the whole 1 hour and 35 minute-running time. It's a real breather; a pleasurable break from your usual Pinoy indie films of urban poverty, and here we finally see the beautiful parts of the country for a change. And with its impressive, breathtaking cinematography and sophisticated, elegant and tasteful musical score, the film will absorb you into its dramatic narrative and emotionally connect with you, and might cause a tear or two to roll down your cheeks. Also, there are some LOL-inducing scenes.

Thelma, though, has glaring flaws that could only be seen by the most critical of reviewers. There are, for example, some actors' sub-par performance, particularly Tetchie Agabayi's (Thelma's mother) unnatural sing-songy delivery of lines and self-conscious performance (could be from her long hiatus) and the aunt's (Sue Prado) forced conversational tone and self-conscious performance, too, and some extra runners that looked anything but pro (awkward running with ridiculous smiling faces), especially the ending statement that sort of killed my admiration because it gave the impression of selfishness. Still Thelma has innumerable good points that the flaws are forgivable.

Impressively directed by Paul Soriano, with English subtitles, and most notably, a surprisingly brilliant performance by 24-year-old Maja Salvador (she is what you call an authentic actress who transformed into her character) who co-produced the film, Thelma is indeed a breakthrough-- a milestone in Filipino filmmaking. Something to be proud of.

I'd see it again.