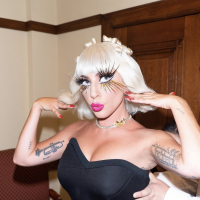 rickart 🏹 Archer Squad🥉
March 2011 in Music Fans #1
Jennifer Lynn Lopez (born July 24, 1969),[1] often nicknamed J.Lo, is an American actress, singer, record producer, dancer, television personality, fashion designer and television producer. She led People en Espa?ol's list of "100 Most Influential Hispanics" in February 2007.[2] She parlayed her media fame into a fashion line and various perfumes with her celebrity endorsement.[3] Outside of her work in the entertainment industry, Lopez advocates human rights, vaccinations and is a supporter of Children's Hospital Los Angeles.
Lopez began her career as a dancer on the television comedy program In Living Color. She subsequently ventured into acting and gained recognition in the 1995 action-thriller Money Train. Lopez's first leading role was in the biographical film Selena (1997), in which she earned an ALMA Award for Outstanding Actress. She earned her second ALMA Award for her performance in the 1998 film Out of Sight. She then starred in the romantic comedies such as The Wedding Planner (2001) and Maid in Manhattan (2002). Lopez had bigger commercial successes with Shall We Dance? (2004) and Monster-in-Law (2005).
In 1999, Lopez released her debut studio album On the 6, which spawned the number one hit single, "If You Had My Love". Her second studio album, J.Lo (2001), was a commercial success, selling eight million copies worldwide. J to tha L-O!: The Remixes (2002), became her second consecutive album to debut at number one on the Billboard 200. Her third and fourth studio albums?This Is Me... Then (2002) and Rebirth (2005)?peaked at number two on the Billboard 200. In 2007, Lopez released two albums, including her first full Spanish-language album, Como Ama una Mujer, and her fifth English studio album, Brave. She has recently began to revive her music career upon the release of her top-five hit, "On the Floor", which features American rapper Pitbull; preceding the debut of her seventh album, Love?.[4] She won the 2003 American Music Award for Favorite Pop/Rock Female Artist and the 2007 American Music Award for Favorite Latin Artist. To date, Lopez has sold over 25 million albums worldwide.[5][6] Lopez was ranked the 27th Artist of the 2000?10 decade by Billboard.[7]
Expanding her repertoire into television, Lopez is currently a member of the judging panel of American reality television competition American Idol.[8][9]

Love? is the upcoming seventh studio album by American recording artist and actress Jennifer Lopez. Conceived during the pregnancy of her twins Emme and Max, Love? is Lopez's most personal album to date, taking inspiration from the birth of her twins and her own experiences with love. Recording for the album began in 2009, with an original release date for the project was set for January 2010 to coincide with Lopez's latest film The Back-up Plan. However following the lack of success with lead single "Louboutins", Lopez and Sony Music Entertainment decided to end their ten year partnership leaving the fate of Love? in uncertainty. In 2010, Lopez has signed a new record deal with Island Def Jam, which will see her release Love? on April 19, 2011.
Currently the album is set to include a mixture of previously recorded material, along with new records with Tricky Stewart, The-Dream and RedOne commissioned by Island Records. The album will combine R&B, pop music and hip hop songs for a mixture of club-ready singles as well as slower mid-tempo songs. Lopez refers to Love? as containing her best vocals to date. The album's first single under Island Records is "On the Floor" and features Pitbull. It is the first release from Love? to garner Canadian and U.S. airplay and is currently impacting on charts around the world. Released from February 11, 2011, it is Lopez's first top-ten hit in the United States in eight years.
0 · Share on Twitter