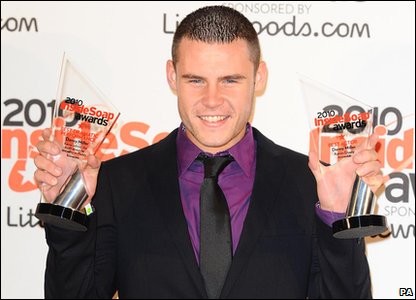 I just wanted to share this GREAT talent the London soap EMMERDALE has right now. I believe that world should see him!!! He is Danny Miller, 19 years old, and is playing a very important role in one of the many storylines of the soap EMMERDALE. One word describes him: BRILLIANT. He plays Aaron Livesy and here is the Wikipedia link of his storyline if you want his full story. It is a great storyline. Promise.

I happen to be on vacation last October in Europe. During our London trip, early October, we stayed in my high school classmate (half Pinoy, half British) flat so instant savings. He introduced us to this soap and said that that night would be special because of the CRASH thingy. He mentioned to us how BRILLIANT Danny Miller is as the gay slef loathing character. I was like, OK soap. The soaps here in the US that seemed ENDLESS. Then the scene came...OMG my jaws dropped ...this kid is OUTSTANDING.

Brilliant is an understatement. He reminds me of Heath Ledger. No other young actor of this calibre has been seen after Heath, my opinion. The crying scenes that he has were all masterfully done. Hello, SOAP??? But regardless, He is truly a rare find.

In one of his interviews, he said he would want to be directed by Danny Boyle. He has won awards left and rgith because of this scene except that he was robbed of the award in the Brtish Soap Awards though. That was the consensus of the people. In January he is up for the National Television Awards for Best Serial Actor Performer. Hope he gets it because the awards would be given for the first time at the O2.

Here is the youtube link to the scene where he finally admits to Paddy (landlord) that he was GAY. You have to understand this is BRITISH English so concentrate.;

Here is the hospital scene (specially the last part when he says "paddy please don't let him die"...OMG*okay**okay**okay*


Currently, jackson is in the hospital...does not want to see AARON again as he blames him for ALL.

It is a compelling story of AARON LIVESY and I hope the world sees how great Danny Miller is.*okay**okay**okay*
0 · Share on Twitter