The 5th Philippine Toys Convention is this years Super Event

The 5th Philippine Toys, Hobbies and Collectibles Convention is this years Super Event!

It would seem a childish thing to still be playing with toys and games even when one is already grown-up and professionally established. But a quick glance at the patrons of the annual Toys, Hobbies and Collectibles Convention would show that, indeed, toy collecting is a serious and thriving hobby that attracts young and old alike. Those young at heart in particular, enjoy recapturing the joy of finding something unique, something rare in their oft times humdrum routines. It is a passion they support with their enthusiasm and their wallets, as these prized items can be quite pricey. As for kids, well, they simply cant resist the rows and rows of toys from action figures to stuffed animals, cards, comics, die-cast cars and dolls of all kinds!

For those who havent yet been initiated into this yearly celebration of all things playable and collectible, this month of June surely holds a lot in store! Get ready for one of the biggest events of the year, as Collectibles Unlimited, in partnership with the SM Megatrade Hall, Globelines and HERO TV, bring you, the 5th Philippine Toys, Hobbies and Collectibles Convention 2006.

What first started as a gathering of private collectors showing off and selling toys, comics and other collectibles in the austere confines of the Megatrade function room back in June of 2002, has grown into a full-fledged convention of international acclaim and proportions. This year, the fifth annual TOYCON, boasts of almost 70 exhibitors and merchants of major toy lines including Marvel and DC superheroes, Art Asylum, Mcfarlane, NECA, Sideshow and Gentle Giant Collectibles, Hotwheels and Matchbox, Japan imports including Bandai, Gundam, Zoids, Battle B-daman, Kaiyodo and Kotobukiya, Collector dolls like Tonner, Medicom, Hottoys and Pullip and of course, hot RPG card games like MAGIC, Hero Clix, War Hammer and Shadow Run. Also included in the mix of merchandise are comic books, graphic novels, original art, posters, prints and childrens toys of all kinds. The convention also attracts droves of online gamers engaged in the best of the virtual competitions like The Legend of MIR 2, Ran Online, O2 Jam and Oz World, RF Online, Dreamville, Rose Online and Ragnarok.

The 5th Toycon will be highlighted by the huge Superman exhibit put up by Warner Brothers in celebration of the years most anticipated movie, Superman Returns. Superman memorabilia and highly prized collectibles will also be on display. There will be a major presence of the anime fans as HERO TV celebrates VOLTES V: Evolution with the celebrities behind the voices of the famous robots exploits. HERO will give away a grand prize of a Red Fox gaming PC and an autographed collectible Voltes V T-shirt during the event. The Toycon also gives recognition to our rich artistic heritage, as it pays tribute to one of the greatest Filipino artists with the Alfredo Alcala Legacy Art Exhibit. And giving the Toycon an international impact is the talent search for comic and graphic artists, toy sculptors and designers, conducted by U.S. based ART ASYLUM TOYS. Art Asylum President and Founder, Digger will be personally handpicking a local crop of lucky artists to join his internationally-renowned team.

The event will also be the stage of exciting contests, like the Live Super Character Cosplay, Battle of the Tribute bands, Customized Action figure, Dress up Die-cast Cars, Fan Films and Create Your Own Superhero Contest. Globelines will demo the latest in their innovative VoIP SoftPhone service and their broadband internet service.

Check out the official website at www.toyconph.tk for program details and registration. 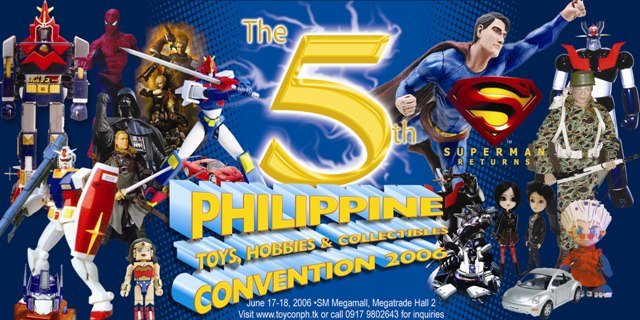